What is an E-liquid

In this article we aim to give you a better understanding of e-liquid; we’ll tell you what the ingredients of e-liquid are and why they are used. 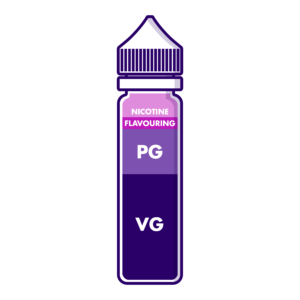 Nicotine is present in most e-liquids (unless of course you use zero nicotine liquid) and is there to satisfy the cravings that would otherwise have you reaching for a pack of cigarettes. We will be talking more about nicotine and nicotine strengths later. A link to our nicotine shots can be found here.

Flavourings are there to help make vaping such an enjoyable activity- part of the attraction of vaping is that there are literally hundreds of flavours to choose from and we will also be discussing flavours in more depth later. A link to our concentrates can be found here.

Propylene glycol– often referred to as PG- is a thin watery liquid and despite its rather strange name PG is a very common substance, which has been widely used for a long time in such things as food additives and PG is also used in asthma inhalers. Its main purpose in e-liquid is to act as a carrier for the nicotine and the flavourings- both of which are dissolved in the propylene glycol. PG is also partly responsible for the throat hit that makes the feeling of inhaling vapour a similar experience to smoking- the throat hit is what many people feel a need for when they are first switching from cigarettes. Generally speaking, the more PG in an e-liquid, the better the throat hit. PG also gives e-liquids a thinner, more watery consistency. A link to our PG/VG can be found here.

Vegetable glycerine– often referred to as VG- is a thick gloopy viscous liquid, which has also been with us for a long time. VG has been used in the food industry for many years and is one of the main ingredients in cough medicines. On its own, VG does not give any throat hit and feels smoother than PG when you inhale its vapour. Its main purpose in e-liquid is to produce the clouds of vapour and generally speaking, the more VG an e-liquid contains, the more vapour you can produce with it. A link to our PG/VG can be found here.